Market Conditions:     Ocean carriers are still preferring to send empty boxes back to Asia instead of taking laden export containers.  In addition, US Exporters are having to scramble to find available bookings that meet their needs due to on dock rail congestion, overbooked feeder vessels in Asia and a lack of equipment in the US interior.

This success has emboldened the carriers to try again in mid-December and also announce an increase for December 15th:

We are closely monitoring this situation and will keep you advised of current pricing. In many instances we will not have confirmation of the exact GRI amount until the day it goes into effect.

Los Angeles / Long Beach Port Congestion:   Due to severe congestion at the terminals in Los Angeles, several vessels are having to anchor outside of the ports and await their turn to berth.   We expect these conditions to continue into at least early 2021.  Below is a picture of the current situation in Los Angeles. 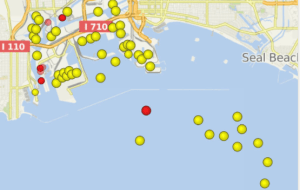 FMC Investigation:    Prompted by multiple stakeholders, the Federal Maritime Commission has begun to investigate detention and demurrage practices of the ocean carriers and three of the nation’s largest ports.   These practices are seen as contributing to the escalating supply chain challenges of congestion and terminal trucking issues.   In addition, the FMC is reviewing the lack of container availability and limited vessel space for US Exporters.    The mission statement of the FMC indicates it is to “Ensure a competitive and reliable international ocean transportation supply system that supports the U.S. economy and protects the public from unfair and deceptive practices.”  “The Commission is concerned that certain practices of ocean carriers and their marine terminals may be amplifying the negative effect of bottlenecks at these ports,” the FMC said.

Chinese New Year:     Chinese New Year begins on Friday February 12th.   Chinese workers get seven days absence from work from February 11th to February 17th.  Many Chinese importers are requesting import cargo arrival by the 1st of February in order to obtain delivery of cargo prior to the CNY shutdown.

Our #1 priority as always is to help maintain our customers’ competitiveness, to keep your cargo flowing as quickly and as consistently as possible, and to continue to communicate effectively along the way.  Our nimbleness, market awareness, and “Built Different” philosophy enable us to do this - as your partner.

We thank you for your support.