America Is on a Lumber Binge

Lumber futures are up more than 85% since April 1

Gold is climbing toward a record high, oil futures went from minus $40 a barrel to $40 in a month and a half, but the hottest commodity in the U.S. these days is wood.

Prices for forest products like lumber and plywood have soared because of booming demand from home builders making up for lost time, a DIY explosion sparked by stay-at-home orders and a race among restaurants and bars to install outdoor seating areas.

Lumber futures are up more than 85% since April 1. Lumber for July delivery settled Thursday at $499 per thousand board feet while the more heavily traded September futures ended at $481.90. Both are above the pre-pandemic high of $463.00, set during the hottest home-building market since 2006. Lumber futures seldom trade above $450.

The gains have lifted shares of mill owners West Fraser Timber Co. and Weyerhaeuser Co., which have outbounced the broader market from its bottom in late March. At that time, the coronavirus shutdown slowed home construction and sales, wood prices sank and mills were curtailing production.

“A lot of saw mills closed up shop and moved into doing maintenance and repairs, figuring demand would drop with people losing their jobs and watching their spending,” said Leroy Ball, chief executive of Pittsburgh’s Koppers Holdings Inc., which makes chemicals used to treat wood for decks, fences and utility poles. “What happened was just the opposite.”

“People didn’t go on vacation,” said Leiby Wieder, who manages Tri-State Lumber in Brooklyn, N.Y.’s Greenpoint neighborhood. “They stayed home and built decks, they built fences, they built pergolas. Anything and everything.”

Harvard University’s closely followed forecast of home-renovation spending predicted a slowdown in a market that for years has been a bright spot in the economy. But the model couldn’t have predicted a pandemic that kept Americans at home for months. Mill orders backed up. 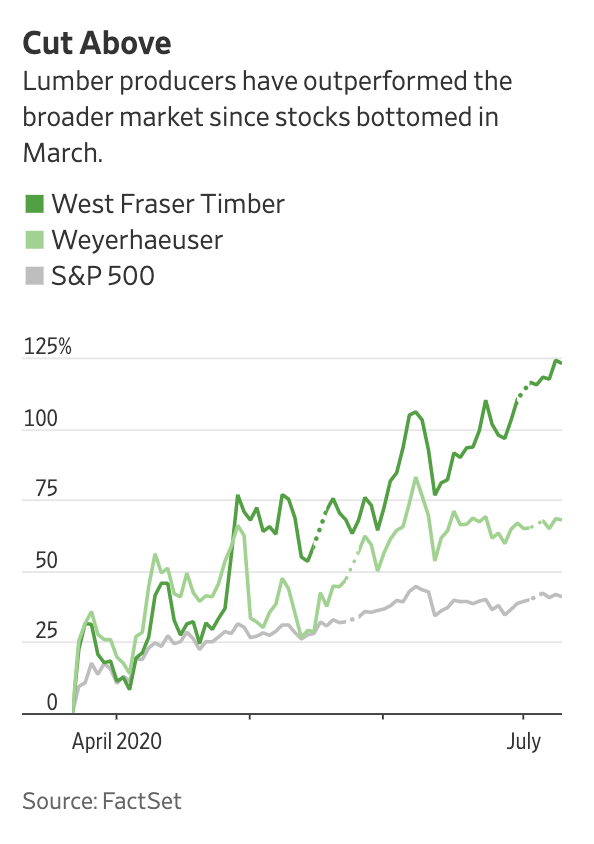 “Demand from our home-center customers at Home Depot, Lowe’s, and Menards has been as strong as we’ve ever seen, and we can barely keep up,” PotlatchDeltic Corp. Chief Executive Michael Covey told investors in June. The Spokane, Wash., company’s stud mills in Minnesota and Michigan were particularly stressed, he said.

In most states, home construction was deemed essential and allowed to continue throughout the shutdown. Work slowed due to social-distancing rules and delayed permits and inspections. But by May construction was booming again. Historically low mortgage rates enticed buyers. Lockdown-weary city dwellers sought suburban living and big landlord companies built houses expressly to rent.

Mills ramped back up and the logjam in the supply chain moved from white wood, which is fresh cut from timber, to so-called green wood, which is treated to last outdoors on patios and along railroads.

Tri-State in Brooklyn has placed orders for five shipments of treated lumber and not yet been given a delivery date or even prices. Besides the neighborhood construction boom resuming and all the decks and pergolas being built, dozens of nearby bars, restaurants and cafes have been slapping together outdoor seating in bids for survival.

With no idea when he will receive more treated lumber, Mr. Wieder has been suggesting to the deck-building bartenders that they use untreated lumber and hope they won’t need their al fresco arrangements long. He expects that it will be October before all the pent-up demand is satisfied.

Mr. Ball said Koppers and its competitors in chemicals are the pinch point now that mills are sawing again. Orders from some of its largest customers are up as much as 40% year over year. Historically a really good year would see orders rise 6% or 7%.

“Who could predict that?” he said. “We’re scrambling and trying to figure out how much is the short-term bump and how much will be sustainable over the long term.”

Read from the original source.