Ports around the world have been complaining for nearly a year about the build-up of empty containers blaming the containers piling up in their yards as contributing to the backlogs and disruption in the supply chains. Recently, ports and regulators have been looking at new steps to move the backlog of empties, but according to a new analysis from Denmark-based data analytics firm Sea-Intelligence, a return to normal in shipping could inundate ports with even more empty containers by early next year.

The Port of Los Angeles and Long Beach have been threatening for nearly a year to institute fees based on excess dwell times to encourage carriers to clear out containers and this comes despite complaints from shippers that contended during 2022 that carriers were rushing ships back to Asia with empties to the detriment of U.S. exporters. All of the ports have already added storage capacity while Oakland, California for example reduced the free time in the yard, and on the East Coast, the Port of New York and New Jersey plans to start in the fourth quarter charging carriers an imbalance fee if they do not remove more containers than they deliver.

“If transportation time is back to normal by early next year, we will see the release of 4.3 million TEU of excess containers into North America, which cannot be expatriated, within the planned network operations,” warns Alan Murphy, CEO of Sea-Intelligence. “This will potentially overwhelm empty container depots in the U.S., an issue which is already beginning to materialize.” 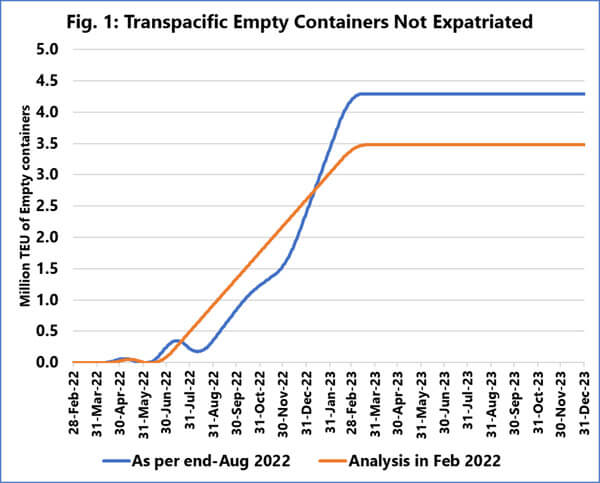 Sea-Intelligence's forecast for the building up of excess containers

During the peak surge in shipping volumes, they highlight that containers were caught up in longer supply chains. With a massive shortage of empty containers, carriers were begging for containers and had to order new containers to be manufactured in Asia. These were fed into the extended supply chains.

In its analysis of the eventual normalization of supply chains and the potential ramifications on the flows of empty containers, Sea-Intelligence highlights the decline in the time it takes from when the cargo is ready at the exporter until the importer takes delivery. Pre-pandemic, the transportation time was 45 days on average, peaking at a transportation time of 112 days in February 2022, which has since been reduced to 88 days, as of the end of August they report.

“As transportation time is now getting shorter, these additional containers will be released back out of the supply chain, and they will start to pile up, primarily in Europe and the U.S.,” predicts Murphy.

Sea-Intelligence had identified this issue in February of this year, but at the time they predicted a slower return into the supply chain and a smaller excess. They had forecast that 3.5 million TEU could become excess in 2023 on the transpacific routes. With reports of slowing shipping levels, Sea-Intelligence is increasing its forecast and pointing to a quicker acceleration of excess containers.

This is already being borne out in ports such as New York and New Jersey that started their efforts this summer to impose the new fee. They recently reported that carriers have been working with them on the backlog of containers but based on Sea-Intelligence’s analysis more containers will be released back into the system further exacerbating the challenges, especially for North American ports.