NEW DELHI—India’s economy shrank by a record 23.9% last quarter—the biggest blow the coronavirus pandemic has dealt to a major economy so far—as a nationwide lockdown and fear of the fast-spreading pandemic strangled spending.

Gross domestic product took a beating in the April-through-June quarter compared with the same quarter a year earlier, according to government data released Monday.

That is the worst decline among all the major world economies that have announced GDP figures for the quarter, according to the latest tally from the Organization for Economic Cooperation and Development. It is also India’s worst decline since 1996, when it started reporting quarterly numbers.

India’s lockdown, beginning in late March, was among the strictest in the world, shutting down virtually every nonessential part of the economy. Yet it managed only to delay the virus’s spread, which continued to crush economic activity after the lockdown began easing in May just as outbreaks started to hit India’s densely populated cities.

Investment plummeted by 47% in the quarter, while consumer spending fell by almost 27%. Government spending grew by 16% but wasn’t enough to overcome the pandemic downdraft.

Economists said the activity picked up when the lockdown lifted, but so far has remained subdued as the virus has spread from the cities to rural areas.

India has more than 3.5 million confirmed infections and 60,000 deaths from the virus. With more than 75,000 new cases a day recently—more than any other country in the world—India is expected to surpass Brazil and the U.S. eventually to lead the world in total reported cases.

That means India’s economy is likely to struggle, or even shrink, in each of the next two quarters as companies and consumers remain hesitant, said Anagha Deodhar, an economist at ICICI Securities.

“The virus is fast moving to rural geographies and the hot spots in megacities are getting worse,” she said. “That will make India’s road to recovery longer.”

India’s GDP is expected to contract more than 5% in the current fiscal year, which goes through next March, according to many economists’ estimates. If that happens it would be its worst performance in decades.

Poor economic performance will likely hamstring India as it tries to push back against China—whose economy has recently begun growing again—for influence in Asia. It may also put pressure on Indian leaders to take politically difficult steps, such as loosening regulations on employment and land, and accelerate other economic reforms to try to boost more investment and employment, some economists say.

New Delhi restaurant owner Nishant Bhatia said he had to shut down one of his two restaurants and lay off more than half of his 50 employees as India’s coronavirus lockdown kept his customers at home.

The lockdown ended but his customers didn’t return. He said he would now have to close down what remains of his business, which has survived every other downturn in the past 22 years. 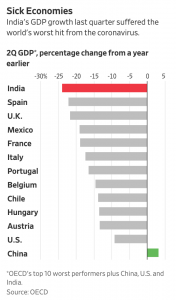 “People are still scared to eat out because no one wants to put their lives at risk,” he said. “Hardly any money is coming in and I have no savings left to cushion the coronavirus shock.”

While the pandemic has hit developing economies around the world especially hard, India’s economy had already been struggling even before the coronavirus arrived. It slowed to an 11-year low in the fiscal year that went to the end of March. That was a steep slide from being the fastest-growing large economy just a few years earlier.

Indian authorities imposed their stringent nationwide lockdown on the largest population of any nation, covering all 1.3 billion people across the country. New Delhi started easing some restrictions in May, which led to a bounce in economic activity. Still, spending on everything from phones to cars to fast food has remained far below pre-pandemic levels.

The country’s average unemployment rate was 19.3% in the April-to-June quarter, according to the Centre for Monitoring the Indian Economy. The unemployment rate climbed to over 23% in April and May then, after the end of the lockdown, it improved to 11% in June.

This challenging period for employees, as well as small-business owners, could douse spending in India for years by shaking people’s faith in the future, said Sonal Verma, Nomura’s chief economist for India.

“The trend growth in consumption will be lower” than the last decade, she said. “You now have a consumer who is more cautious because of the uncertainty.”

Most economists expect the economy to struggle for the rest of the fiscal year started April 1, as the pandemic penetrates rural areas and hinders consumer confidence and purchasing power.

Phone shops say they are seeing fewer new phone buyers and a lot more customers requesting repairs to old phones. Uncertainty about jobs and incomes has persuaded more people to try to save money by making their smartphones last longer, said Parveen Sharma, an employee at a shop in eastern Delhi.

Policy makers have revved up fiscal and monetary stimulus but it hasn’t been enough, economists said. New Delhi has announced more than $250 billion in economic packages to help the economy and the Reserve Bank of India has cut interest rates repeatedly.

Mobility data from Google show that despite the end of most of the country’s lockdown measures and New Delhi’s efforts to revive confidence, activity around retail recreational locations in India remains 40% below the level seen before the coronavirus started to spread early this year.

Activity in the U.S. is down only 13% from pre-Covid levels. In Brazil—a developing country with a large number of cases, like India—mobility around such locations is down only 19%, according to the Google Mobility Report.