ECB chief says the eurozone economy is experiencing a strong rebound; euro jumps against the dollar

FRANKFURT—European Central Bank President Christine Lagarde sounded an optimistic note on the eurozone’s economy and played down concerns over the recent strength of the euro, sparking a rally in the common currency and stirring questions as to whether the bank will provide a fresh round of stimulus to support the region’s stuttering recovery.

Following a meeting of the ECB’s governing council, Ms. Lagarde said the 19-nation currency union was experiencing a strong economic rebound from the deep contraction caused by the coronavirus pandemic, citing a recent bounce back in manufacturing and services.

However, analysts warned that the ECB might be too sanguine at a time when Covid-19 cases are surging across the continent and eurozone inflation has fallen below zero.

“We can’t help but feel that the ECB just missed an opportunity to remain ahead of the...curve,” said Frederik Ducrozet, an economist with Pictet Wealth Management in Geneva.

The ECB has used its policy tools aggressively since March, unveiling some $3 trillion of stimulus that roughly kept pace with the Federal Reserve. Its actions helped to pin down borrowing costs for indebted governments in southern Europe and keep credit flowing. 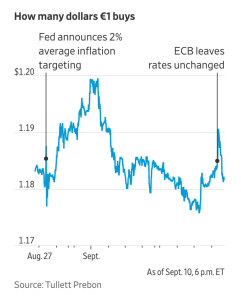 Recent economic data have disappointed however, suggesting that confidence among the region’s consumers and businesses is starting to wane, even though economic activity remains as much as 10% below its level at the start of the year.

Analysts had expected Ms. Lagarde to hint at a fresh burst of stimulus soon amid signs that the region’s recovery is losing steam, especially after Federal Reserve Chairman Jerome Powell signaled last month that the U.S. central bank will keep interest rates low for years, putting pressure on the ECB to follow suit.

The ECB slightly revised up its forecasts for economic growth and inflation through 2022. It left its key interest rate unchanged at -0.5% and said it would continue to purchase up to €1.35 trillion, equivalent to $1.59 trillion, of eurozone debt under an emergency bond-buying program unveiled in March.

Ms. Lagarde suggested that officials hadn’t discussed fresh stimulus, and were relaxed about a recent sharp drop in the region’s inflation rate, to -0.2% in August. The ECB aims to keep inflation just below 2% but has missed that target for years.

The ECB has been criticized in the past for being too slow to stimulate the region’s economy, including by raising interest rates just ahead of economic downturns in 2008 and 2011.

“It wouldn’t be unwise to learn the lesson and avoid claiming victory too early,” Mr. Ducrozet said.

While Ms. Lagarde said the ECB was carefully assessing the value of the euro, which has surged more than 10% against the dollar in recent months, she didn’t hint at any imminent policy action.

The euro rose more than half a cent against the dollar, to $1.19 on Thursday, as investors bet that the ECB wouldn’t try to halt the common currency’s appreciation.

Analysts warned that the ECB’s optimism could backfire if it drove up the value of the euro, which would weigh further on inflation and might force the ECB to do more later.

A stronger euro tends to hurt the region’s large exporters by making their products more expensive in international markets and hurting growth. Exporters are also wrestling with disruptions to their global supply chains, ongoing trade conflicts, and uncertainty around the European Union’s future relationship with the U.K. after Brexit.
Virus cases are surging in France and Spain, raising fears of a powerful second wave in the winter months that could trigger fresh social restrictions and hurt consumer and business confidence.

Europe’s generous state support programs have so far helped to keep unemployment low compared with the U.S., and businesses afloat. But some of those could soon be phased out.

ECB officials have recently said they are worried about a possible wave of job cuts and corporate bankruptcies later in the year as some state subsidies are wound down.

The ECB’s decision to stand pat “is much more to do with the reduced effectiveness of the remaining options at its disposal rather than the central bank being comfortable with the current state of the economy,” said Jai Malhi, a strategist at J.P. Morgan Asset Management.

The ECB’s key interest rate is already below zero, making fresh interest-rate cuts problematic, and the bank is buying tens of billions of euros a month of eurozone debt.