Lockheed, Micron and Others Pay Bills Early to Protect Suppliers

Some manufacturers offer a crisis lifeline to smaller businesses, even as many firms try to save cash

To help shield themselves from the economic damage caused by the coronavirus pandemic, some big U.S. manufacturers are trying something different: They are paying their bills early.

Businesses such as Lockheed LMT +1.50% Martin Corp. and Micron Technology Inc. MU +2.61% that depend on complex global networks for parts and services are worried the prolonged economic slowdown could disrupt their supply chains. Looking to deepen ties with their suppliers, reduce risks or grab market share, the companies are pumping money to smaller businesses that could fail otherwise. 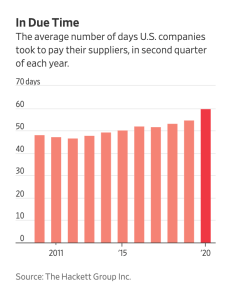 The maker of jet parts had already laid off 15% of its roughly 200 workers when Lockheed’s payments arrived early. “This was a pleasant surprise,” Mr. Bentley said. After the cash injection, Perfekta avoided cutting more jobs and continued making the parts that Lockheed needs to keep its jet fighters rolling off the assembly line.

During the second quarter, Lockheed accelerated payments totaling about $1.3 billion to its supplier network, said Lockheed finance chief Ken Possenriede. “We have given priority to small and vulnerable suppliers,” he said.

Such moves go against the tide of a cash-management practice that has gained strength in many corporate treasury departments in recent years. It is more common for companies to delay payments to boost short-term capital they can then use for other investments. That is especially true in times of crisis.

On average, the 849 largest nonfinancial U.S. companies took 60 days in the second quarter to pay suppliers—a 10-year record—according to Hackett Group, a consulting firm. The average rose 10% from a year earlier, when U.S. companies took about 54.7 days to pay.

Much of the recent increase is being driven by retailers, airlines and industries that have been hurt by the pandemic. JetBlue Airways Corp., JBLU +1.31% for example, is pushing its suppliers to take payments 90 to 120 days after invoicing, up from an average of 30 days.

“That helps you reduce your cash burn,” said JetBlue Chief Financial Officer Steve Priest, who said he isn’t concerned about the financial health of the supplier network. “We drive a hard bargain at JetBlue.”

The flexibility that extended payment terms give JetBlue and others comes at the expense of suppliers. Those smaller companies are often forced to tie up more of their own cash in receivables or to eat interest costs. In some cases, the stress is too much to bear.

Sportswear-technology company Hologenix LLC was forced into bankruptcy protection this April when sportswear brand Under Armour Inc. UA +2.91% doubled the number of days it took to pay its invoices to 90 days. “It was a tough situation,” said Seth Casden, Hologenix’s founder.

Under Armour said it extended vendor payment terms as its own customers delayed payments. “As our customers are now beginning to pay us back on normal terms, we’re simultaneously doing the same with our vendors and suppliers,” a company spokesman said.

During the pandemic, where the economic damage has spread widely, there is more danger that squeezing suppliers can rebound on companies, said Carlos Mendez, co-founder of Crayhill Capital Management LP, a New York asset-management firm that invests in supply-chain financing companies.

“Companies know it’s a tenuous situation,” Mr. Mendez said. “They can’t continue to extend payment periods so much that they hurt themselves.”

The Pentagon set up a program to pay its big contractors, such as Lockheed and General Dynamics Corp., GD +0.88% in advance so they could do the same with suppliers. General Dynamics, which makes Abrams tanks and Gulfstream business jets, now settles its bills as soon as it gets its orders, instead of waiting as long as 60 days to pay its invoices.

“We are in a symbiotic relationship,” said Jason Aiken, General Dynamics’ finance chief. “Any failure can cause much greater damage.” The company plans to continue the early payments at least until the end of the year, he said.

Micron, a computer-chip maker, relies on a complex network of companies for chemicals, semiconductor raw materials and manufacturing support. To protect those suppliers, Micron has been paying some of them in 10 days, compared with a previous average of about 50 days, said Chief Financial Officer David Zinsner. The company has advanced about $200 million in supplier payments since late March.

Like the defense contractors, Micron’s business has fared well despite short-term disruptions from the pandemic. The memory-chip giant’s fiscal third-quarter revenue rose 14% from a year earlier, and it has forecast higher sales in the current quarter.

In some cases, suppliers are the ones giving their customers a break. Garbage-collection and recycling company Waste Management Inc. WM +0.50% in March began reaching out to small and midsize customers in the hard-hit restaurant, hotel and education sectors. Many needed fewer garbage collections or a pause in service while their businesses were locked down, and Waste Management obliged, said Chief Executive Jim Fish.

Revenue for the company declined roughly $10 million in June and July because it paused fees, reduced some prices and gave some customers a free month of service. Mr. Fish said the company had been paying down debt and building cash reserves to give it a buffer for difficult times, and used some of it to help its customers.

“We’re not overly concerned about the cost,” Mr. Fish said. “This pays itself back over time.”