Investors in container-shipping companies are having an unexpectedly good year as freight rates surge despite the pandemic, thanks to quick capacity adjustments and surprisingly robust demand.

Shares in several major operators have rebounded sharply. A.P. Moeller-Maersk AMKBY 1.05% A/S’s nonvoting stock, which at its low point in March was down by almost half for the year, is now roughly flat. The Danish company owns Maersk Line, the world’s biggest ocean carrier.

Hong Kong-listed Cosco Shipping Holdings Co., 1919 1.03% which controls the world’s third-largest container carrier by capacity, and Taiwan’s Evergreen Marine Corp. 2603 -1.15% are up about 23% and 32% for the year, respectively, after also recovering from steep selloffs. 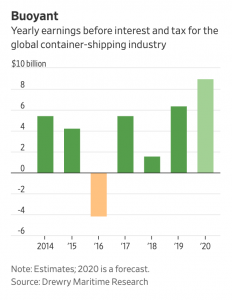 “Ocean carriers got out ahead of the pandemic,” said Simon Heaney, senior manager for container research at Drewry Shipping Consultants Ltd. “It’s a good year for carriers in terms of profits.”

Drewry now expects the global industry to earn around $9 billion before interest and taxes this year, up 41% from 2019. It had earlier forecast a $3.7 billion loss. If shipping rates stay high, Mr. Heaney said, he might lift his forecast further.

Container-shipping companies play a vital role in global trade by moving clothes, food, furniture, electronics and much else around the world.

As the coronavirus pandemic unfolded, investors and analysts say, shippers were quick to idle vessels and cancel sailings, buoying freight rates and lifting profits. When demand proved more resilient than expected, they were equally quick to add back capacity—without crossing the line into oversupply.

The overall picture for trade is tough, but improving. The Geneva-based World Trade Organization now forecasts global volumes will fall 13% this year, after previously warning they could crash by a third.

Many shipping companies and their corporate clients expected a much steeper drop-off in demand than actually occurred, said Dave Perrett, co-head of Asian investment at M&G Investments: “They thought it would be absolutely catastrophic, and it wasn’t.” M&G funds hold stakes in shipping companies including A.P. Moeller-Maersk, FactSet data shows. 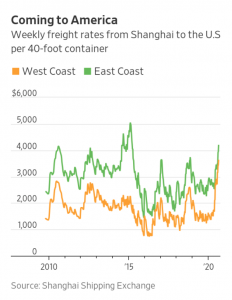 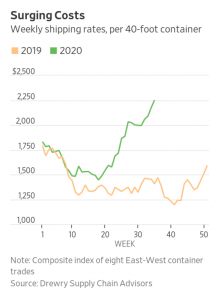 In the U.S., retail sales topped prepandemic levels in July. Andrian Dacy, head of the global transportation group at J.P. Morgan Asset Management, said retail spending in the U.S. and Europe had been buoyed by government financial assistance to households.

Plus there is the e-commerce boom, he said: Many people stayed home and spent money they would otherwise have used on movies, travel or meals. “They’re online, they’re ordering things, and those things are being delivered and moved to the supply chain,” he said. Trade in medical supplies also surged, Mr. Dacy added.

In the week ending Aug. 28, the spot rate to ship a 40-foot container from Shanghai to the U.S. West Coast hit $3,639, the highest in over a decade, according to the Shanghai Shipping Exchange. A Drewry composite index of rates for eight east-west routes hit $2,251 in the week to Aug. 27, up 60% from a year earlier.

Not all shippers’ share prices have benefited. Germany’s Hapag-Lloyd AG HLAG +0.92% , the world’s fifth-largest container shipper by capacity, spiked to a record in May but is now down 35% for the year. Japan’s Mitsui O.S.K. Lines 9104 -0.56% is down by a similar amount. 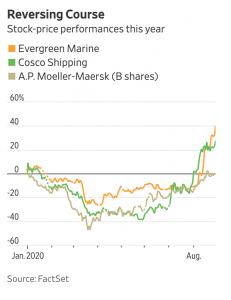 The industry is partly reaping the benefit of its distress over the past decade, when low profits spurred takeovers, partnerships and investment in bigger, more-efficient ships. Five players control 64% of the global fleet now, versus 47% in 2008, according to Parash Jain, global head of shipping and ports equity research at HSBC. Greater concentration makes cutting capacity easier, investors and analysts said.

And there is little risk that new ships will flood the market, pressuring freight rates. Outstanding orders stand at about 9% of existing fleet capacity, versus more than 50% during the global financial crisis, Mr. Jain said.

M&G’s Mr. Perrett said tighter environmental regulations would also damp demand for new vessels. Overall, he said, the industry would avoid a return to its earlier, damaging focus on growth.

“There’s no need for one player to be disruptive,” he said. “The focus here would be more about profitability as opposed to market share.”