Tech Startup, Trying to be Amazon for Farms, Runs into AG Giants

OMAHA, Neb.—Inside a packed arena last December, 2,700 farmers sipped coffee from paper cups and listened to remarks on the Midwestern economy: incomes down, costs up and bankruptcies rising.

The speaker wasn’t a politician or an academic. He was Charles Baron, co-founder of Farmers Business Network, or FBN, a Silicon Valley startup that is trying to build an Amazon-like online marketplace for agricultural supplies.

“It is critical that you have control,” said Mr. Baron.

FBN doesn’t have a lot right now. Some of the world’s biggest farm suppliers, including Bayer AG, Corteva Inc. and Syngenta AG have refused to sell their brand-name seeds and crop sprays to the startup. Executives say traditional stores remain central to their business.

Major farm retailers and wholesalers have urged farmers and suppliers to avoid the platform, in some cases circulating letters and emails warning that FBN’s goal is to gather and secretly sell data on crops and farms. Mr. Baron says it doesn’t.

And after FBN purchased a Canadian agricultural supplier in 2018, some large farm-supply companies stopped providing their products to the business, leaving FBN unable to sell them. That maneuver sparked an investigation by Canadian regulators, which is ongoing.

Low-cost, web-based companies have upended retail, grocery and other American industries over the past two decades, offering consumers an array of choices in products at low prices with speedy delivery. The coronavirus pandemic has accelerated the phenomenon, pushing more shoppers online.

The $40 billion U.S. farm supply business is a holdout. FBN wants to change that, undercutting bricks-and-mortar retailers on price and delivering supplies directly to farmers. Its battles, involving some of the industry’s biggest players, show how hard it can be.

Big seed and chemical suppliers say they have done nothing improper. Executives say they need to control who they allow to sell their products to make sure farmers don’t wind up with the wrong seed for their soil, or ineffective spray. Major farm retailers say they provide in-the-field service and local knowledge that FBN can’t match.

“Is that online tool going to bring you the skid of product you need on a Sunday?” wrote Neil Douglas, head of Canada agriculture for farm chemical distributor Univar Solutions Inc., in a 2018 email. FBN, he wrote to agricultural manufacturers and colleagues, is a “data company that wants to collect and aggregate data to eventually sell for a profit.”

Amol Deshpande, FBN’s chief executive and co-founder said: “These are the tactics the industry will use to keep players like us out, because they can.”

Six-year-old FBN is among the best-funded farming startups. It has raised about $571 million, including $250 million this month, from investors such as heavyweight venture-capital firms Kleiner Perkins and Alphabet Inc.’s GV, as well as money-management giants T. Rowe Price Group Inc. and BlackRock Inc. 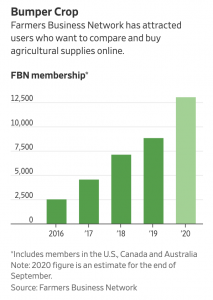 Based in San Carlos, a small community in the San Francisco Bay Area, the company employs about 500 people, with additional operations across the Midwest. Its nearly 13,000 members farm an area roughly the size of Wisconsin. As of late 2018, the company was generating hundreds of millions of dollars in sales, Mr. Deshpande said at the time.

Neither Mr. Deshpande, 42, nor Mr. Baron, 37, grew up on a farm. Mr. Baron is from Palo Alto, Calif. and worked on renewable energy projects at Alphabet’s Google unit before enrolling in Harvard Business School. Pitching in with the harvest in Nebraska where his wife’s family farms, Mr. Baron said he was struck by radio broadcasts discussing crops in Brazil, and how global forces of supply and demand shaped U.S. farmers’ livelihoods.

Mr. Deshpande is a native of the Chicago suburbs, where his father, an environmental engineer, had worked with farmers. Mr. Deshpande took a job at a hedge fund firm owned by the agriculture giant Cargill Inc. after completing Cornell University’s management program. In 2008, he joined Kleiner Perkins as a partner, where he saw food and technology increasingly entwined.

He and Mr. Baron, who knew each other from San Francisco’s tech scene, paired up to build a platform that would let farmers compare pesticide and crop-seed performance and prices. They launched FBN in 2014 from an office in Kleiner Perkins’ basement.

Their initial task was to recruit farmers. The close-knit agricultural supply industry remains heavily centered on rural stores and grain elevators. Sacks of seed and truckloads of fertilizer still get sold across the hood of pickup trucks, between farmers and salesmen who may know one another from church or coaching Little League Baseball. A handful of multibillion-dollar corporations handle the bulk of U.S. seed, pesticide and fertilizer sales.

Messrs. Baron and Deshpande, meanwhile, are outsiders with a Silicon Valley background that has made some farmers leery. To develop their platform, they gathered a half-dozen farmers in early 2014 around potato skins and spinach dip at a Springfield, Ill., Applebee’s, discussing how data analysis could help solve their economic problems. At a recent conference, they offered computer data science classes to farmers.

By the end of FBN’s first year, nearly 300 farms had signed up, Mr. Baron said. Membership costs $700 annually, and if farmers provide data on supply costs or seed performance, they get access to FBN’s crowdsourced price and product database. Farmers can use it to bargain with suppliers for better deals. 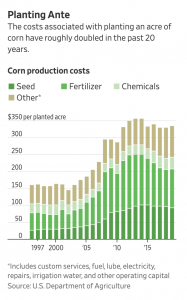 Introducing the e-commerce platform at a 2016 conference, FBN flashed charts showing that prices for seed and chemicals increased as manufacturers got bigger. “You need true competition for your business, because without it, we see those forces, consolidation and price increases, continuing,” Mr. Baron told the audience.

In 2016, officials for CHS Big Sky, a Montana branch of the biggest U.S. agricultural cooperative, warned farmers in a letter that FBN wasn’t doing anything different than the typical farmer-owned retail operation.

“FBN just does it with little overhead and without returning any profits to you the [producer], while lining the pockets of [investors] and big data companies like Google.”

Mr. Baron said that FBN doesn’t sell farmers’ data to other companies, and only shares data if directed by farmers.

A CHS spokeswoman said local farm retailers benefit from relationships among farmers, salesmen and other advisers who know the land and work in their communities. “That was true in 2016, and it’s even more true today,” she said.

FBN ran into bigger roadblocks with seed and pesticide makers, who largely refused to directly supply the platform and allow it to sell Farm Belt staple products like Syngenta’s Force insecticide, or Corteva’s Pioneer corn seed.

FBN executives said in some cases they are able to procure name-brand farm products from brokers or wholesalers, but at higher prices than traditional retailers. They said the startup has otherwise been shut out by manufacturers intent on protecting the existing network of farm retailers, and its established profit margins.

Syngenta, the world’s biggest pesticide manufacturer, in March 2018 told agricultural retailers in a letter that FBN had been selling some of the Swiss company’s products despite not being an authorized dealer. Syngenta said it planned to step up audits of its retailers to determine whether its seeds and sprays were being resold to FBN and other unauthorized brokers, potentially violating Syngeta’s policies.

The company warned that products sold through FBN’s platform could be unreliable. “We have concerns about product integrity, stewardship, and regulatory compliance,” wrote Michael Boden, Syngenta’s head of U.S. crop protection sales, in a letter to vendors. 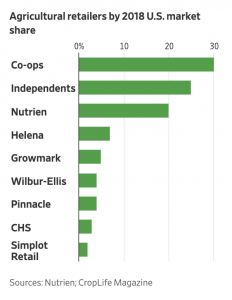 FBN’s Mr. Baron said the company has sold Syngenta chemicals purchased from brokers and they were not faulty or mishandled.

In early 2018, FBN began discussions to acquire Yorkton Distributors, a Saskatchewan-based farm supply store, as a potential launchpad for FBN’s nascent Canadian business. The 40-year-old retailer sold seed and pesticides made by companies including Bayer, Corteva and others.

Before the purchase, FBN executives said, they talked to some manufacturers that sold products to the company, making sure they would continue to supply the Canadian business.

“No one indicated they’d be disfavorable,” Mr. Baron said. FBN announced its deal for Yorkton on March 27, 2018, saying that the acquisition would let FBN sell name-brand seed and pesticides to Canadian farmers.

Four days later, Patrick Bergermann, head of agriculture for Federated Co-operatives Ltd., a competing Canadian seed and pesticide retailer with $7 billion in annual sales, sent an email to agriculture industry officials, according to court documents. He warned that FBN would undermine the industry’s existing business model, harming both farm retailers like Federated and manufacturers of crop seeds and chemicals.

“How our key manufacturing partners decide to engage with this business will be closely observed by us and likely all of our traditional retailing peers across Western Canada,” Mr. Bergermann wrote in the email, according to court documents.

Univar, a major farm chemical distributor, on April 6, 2018, sent an email to Canadian retailers saying that it wouldn’t supply Yorkton or FBN. It warned that the online platform would erode industry profit margins while providing little service to farmers.

Over the following months, suppliers including Bayer, Corteva and Cargill told FBN they no longer would sell seeds, pesticides and other products to the Yorkton store, according to court documents. By the end of the summer, FBN had lost access to about two-thirds of the branded products previously sold at Yorkton, Mr. Baron said.

FBN in June 2018 sued Univar in a Saskatchewan court, accusing the Illinois-based company of making false statements and encouraging other farm suppliers to avoid doing business with the startup. FBN is seeking damages and an injunction barring Univar from further actions against the company.

A Univar spokesman declined to comment on the lawsuit. He said that the company decided to stop doing business with FBN because the two companies’ objectives didn’t align.

Facing steep losses on its Yorkton investment, FBN later that year temporarily leased the business to a rival Canadian farm retail chain. But FBN retains ownership in the business, and suppliers have continued to refuse to sell to it, Mr. Baron said.

Following a complaint from FBN, Canada’s Competition Bureau in late 2019 opened a civil investigation into the matter. In recent months it has requested documents from Bayer, Corteva, Cargill, BASF and Univar, as well as Federated Co-operatives, according to documents detailing the investigation that were filed in Canadian federal court. The U.S. Department of Justice’s antitrust division is monitoring developments in the Canadian case, people familiar with the matter said. A Justice Department spokeswoman declined to comment.

A spokesman for the Canadian agency declined to comment, citing the open investigation.

Representatives for Bayer, BASF and Corteva said they were cooperating with the investigation and that their conduct didn’t violate Canadian antitrust rules. A spokeswoman for Cargill said a supply contract with Yorkton expired in 2018 and wasn’t renewed after that.

Corteva Chief Commercial Officer Tim Glenn said that the company’s existing dealers, distributors and retailers make sure farmers get reliable products with the best results, and any new sellers would need to meet those standards.

Despite the industry opposition, Mr. Deshpande and Mr. Baron believe they can grow FBN.

The company started its own line of seeds and purchased a Canadian chemical business to produce FBN’s own weed and bug sprays. But those efforts are proving costly, and last year FBN laid off some staff as it restructured its sales division. Mr. Baron said the company is adding more employees, including its own crop advisers. The company hasn’t yet turned a profit.

Over time, as FBN signs up more farmers, its executives believe more seed and chemical companies will be willing to work with the company.

In March, as Covid-19 spread and corn prices sagged, FBN signed on more members than any month in its history, Mr. Deshpande said.

“People are saying, ‘I’ve got to have more competition for my business,’” he said.