The U.S. Coast Guard has reopened the port of San Juan, Puerto Rico to marine traffic after the passage of Hurricane Fiona. The service, which is often first on the scene after a major Caribbean storm, is conducting damage overflight surveys to assess the impact on marine infrastructure and shoreside communities.

Passage in and out of the Port of San Juan is currently restricted to daylight hours only. The ports of Arecibo, Ceiba, Culebra, Fajardo, Ponce, Vieques and Yabuco have also reopened, as well as all ports in the U.S. Virgin Islands.

To provide relief for communities affected by the storm, the Federal Emergency Management Agency (FEMA) has deployed five incident management teams and hundreds of personnel.

“Our partnership with the Government of Puerto Rico has never been stronger and we remain committed to helping them respond to and recover from Hurricane Fiona,” said FEMA Administrator Deanne Criswell. “We’re sending hundreds of additional staff in the next few days to place staff in each of the impacted communities to supplement our already vast footprint.”

The storm's arrival in Puerto Rico coincides with the fifth anniversary of Hurricane Maria, which devastated the island's infrastructure in 2017. Flash flooding from Hurricane Fiona's heavy rains washed away at least one bridge that was repaired after Maria.

Meanwhile, Hurricane Fiona continues to churn northwards as a stronger Category 3 hurricane. By Tuesday afternoon it was passing through the Turks and Caicos with winds of 115 miles per hour, bringing storm surge of up to 5-8 feet in the most affected areas. Its track is expected to pass close by Bermuda.

Communities on the remote Bering Strait had their own storm to deal with last weekend. The remnants of Typhoon Merbok drifted into the North Pacific and strengthened, bringing hurricane-force winds and setting a new monthly record for low pressure over the stormy Bering Sea.

Coastal flooding from the typhoon's storm surge was also expected along Alaska's Arctic coast from Point Hope almost all the way to Prudhoe Bay, with water levels as much as 3-6 feet above the typical tide line. 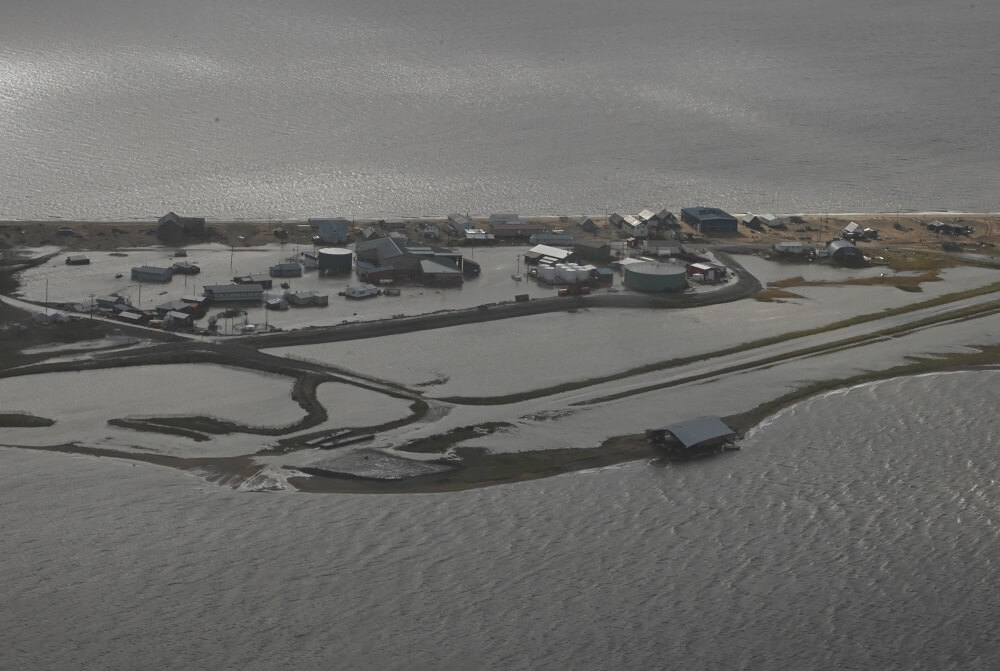 Alaska Governor Scott Dunleavy has declared a disaster for the affected region and the state has set up an emergency operations center to respond.

The U.S. Coast Guard is contributing to the response as well. An Air Station Kodiak Hercules aircrew carried out an overflight survey of the area on Sunday, and Coast Guard Sector Anchorage is sending personnel to help communities assess damage to their ports and inspect their fuel storage facilities. Remote communities in Western Alaska typically depend on diesel for energy and maintain modestly-sized tank farms to supply their needs.

More coastguardsmen will follow within several days to help speed up the recovery of barge transportation to affected communities, allowing resupply by sea to resume.