Foreign-trade gap in goods and services expanded 19% from June, with monthly goods deficit at widest level on record

The foreign-trade gap in goods and services expanded 19% from the prior month to a seasonally adjusted $63.56 billion in July, the Commerce Department said Thursday. That was the largest monthly trade deficit since July 2008, during the 2007-2009 recession.

The growth of the deficit reflected a pickup in U.S. demand for foreign-made goods and services as states eased restrictions on business activities across the country. 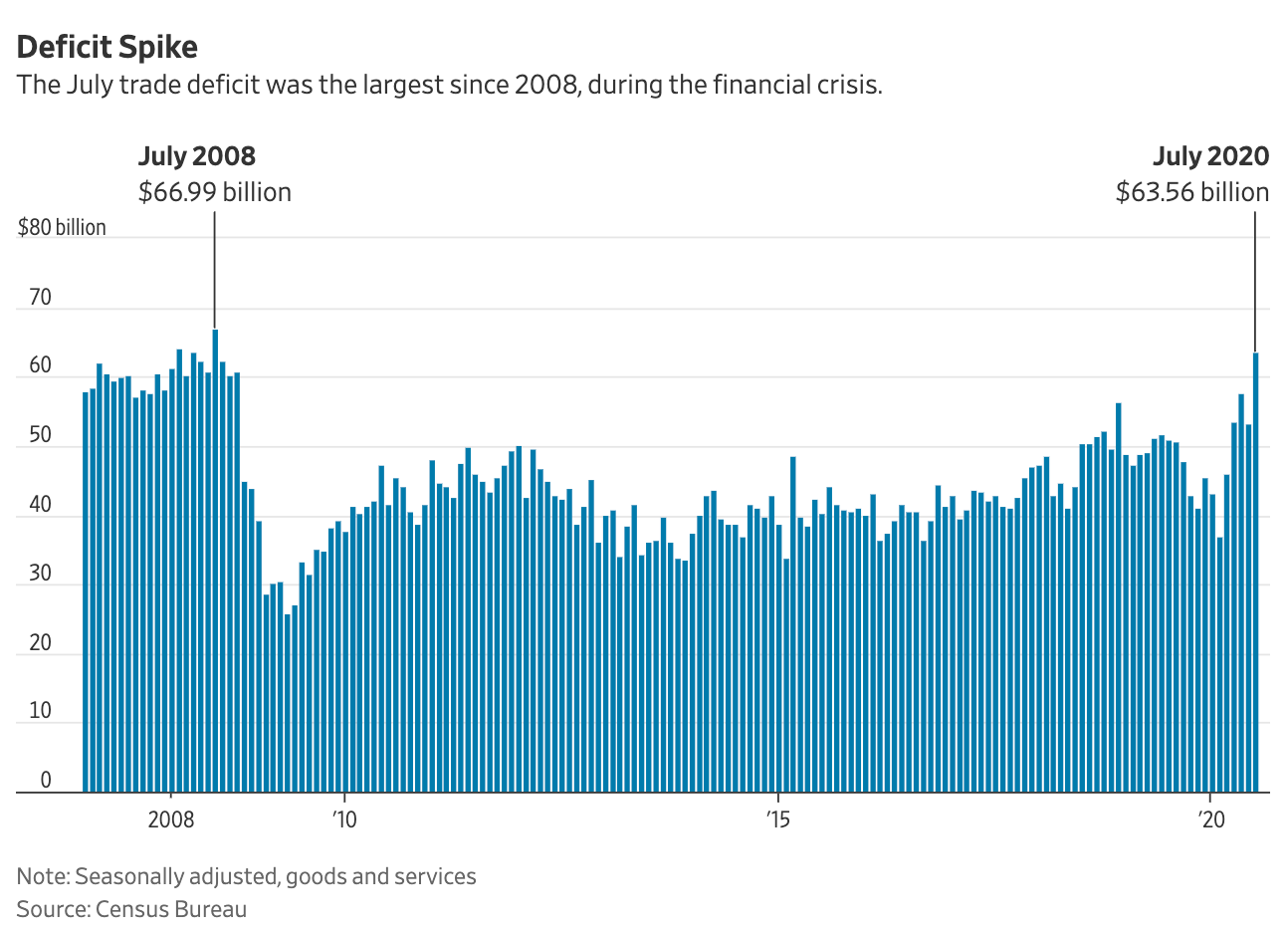 “The import side pretty much has bounced back, but the export side has not,” said Joshua Shapiro, chief U.S. economist at MFR Inc.

Imports grew 11% in July to $231.67 billion as Americans bought more foreign-made vehicles, industrial supplies, capital goods and consumer products like cellphones and furniture. That pushed the monthly goods deficit to its widest level on record.

While the U.S. usually runs a deficit in goods, it runs a surplus in services. That surplus, in services such as tourism, medical care and higher education, shrank in July to its lowest level since August 2012 as many foreign visitors stayed home due to the coronavirus pandemic and international border closures. Restrictions on travel, many of which remain in place, also make it difficult for exporters to find new foreign customers. 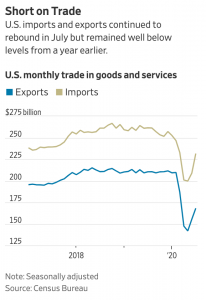 Exports picked up in July by 8.1% to $168.11 billion from June’s $155.48 billion. Exports of vehicles, consumer goods, industrial supplies and capital goods all rose. Still, exports remained well below the $209.65 billion level seen in February before the pandemic.

“A strong and sustained rebound in trade flows is uncertain given a still weak global growth and demand backdrop,” said Rubeela Farooqi, an economist at High Frequency Economics, Ltd., in a note to clients after the release of Thursday’s report.

U.S. manufacturers benefited from pent-up demand in July. U.S. factory orders grew a seasonally adjusted 6.4% in July for the second month in a row, while orders for durable goods increased 11.2% from the previous month as manufacturers boosted output and the economy continued its climb back from disruptions related to the coronavirus pandemic, the Commerce Department said in other recent reports.

“I think there’s a desire to get back to normal but a reluctance to really embrace it just in case you’re wrong,” he said, noting that mines and plants still have social-distancing and face-mask protocols in place.

Other signs suggest manufacturers’ output grew in August, both in the U.S. and overseas, as demand picked up after several months of pandemic-related lockdowns.

A survey of purchasing managers in manufacturing released Tuesday by the Institute for Supply Management found that U.S. factory output grew in August at the fastest pace since November 2018, driven by a surge of new demand and faster export orders. Germany and China also recorded stronger recoveries, according to IHS Markit.