A crush of goods coming into West Coast seaports is straining capacity at the gateways and on key inland distribution lanes, raising shipping prices for retailers and complicating efforts to replenish inventories following the supply chain upheaval from the coronavirus pandemic.

“It is bursting at the seams here in Southern California,” said Weston LaBar, chief executive of the Harbor Trucking Association, which represents trucking companies at the neighboring ports of Los Angeles and Long Beach.

Mr. LaBar said trucking companies are calling the group “asking if anyone has additional drivers that can sub-haul for them,” while the movement of containers between the ports and nearby distribution centers has slowed.

The tumult at the Southern California port complex, the largest gateway for U.S. imports from Asia, comes as retailers are scrambling to restock depleted shelves after months of lockdown while also bringing in goods for the holiday season. The activity marks a sharp turnaround from the spring, when U.S. ports reported double-digit declines in imports of containers, which carry most retail and manufacturing goods into the U.S.

Freight railroads and trucking companies that sharply reduced their operations as the pandemic-driven downturn took hold in the spring now are struggling to get workers and equipment in place to handle the surge.

Ports haven’t released figures for shipping volumes in August, but early signs suggest the peak shipping season that had been forecast to be a bust instead could be a boom.

The Global Port Tracker report released Wednesday by the National Retail Federation and Hackett Associates said the preliminary estimate for August showed 2.06 million loaded containers, measured in twenty-foot-equivalent units, hit U.S. shores last month, which would be the most in any month since the report was first published in 2002. 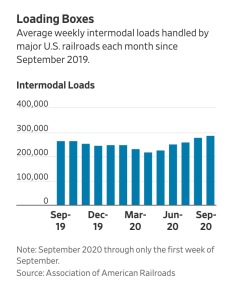 “Typical replenishment activities are colliding with the already planned peak season volumes,” said Mac Pinkerton, president of freight broker C.H. Robinson Worldwide Inc.’s North American Surface Transportation division. “That’s creating a lot of imbalances in places like the Port of L.A. and the ports of entry in Texas on the southern border,” he said.

Freight railroads that carry a large share of the retail and manufactured goods deeper into U.S. inland distribution points through intermodal truck-rail services are grappling with the influx of cargo after months of slack demand during the earlier stages of the pandemic.

Union Pacific Corp., the second-largest U.S. railroad by revenue, has raised surcharges on some West Coast lanes for spot-market shippers and for customers moving more cargo than they had contracted for.

“Intermodal shipments have been the fastest to rebound as retailers replenish inventories,” a spokeswoman said, adding that Union Pacific is giving priority to customers with load commitments before taking on surge and transactional shipments.

U.S. railroads overall moved 287,339 intermodal loads the week ending Sept. 5, nearly a quarter more than they handled in the same week a year ago and the highest weekly total since the second week of January 2019, according to the Association of American Railroads. The volume was also 34.5% more than the railroads took at the low point of freight demand in mid-April.

Last month, operators pulled about 4,160 intermodal railcars out of storage to help handle the rush, according to AAR figures.

Getting equipment in place quickly can be a challenge, said Larry Gross, president and founder of Gross Transportation Consulting. “The railroads are struggling a bit with that equation,” he said.

Shippers that aren’t able to move goods by rail are turning to the long-haul truckload market, where prices are climbing. Dean Croke, principal freight market analyst at DAT Solutions LLC, said the average cost to hire a big rig from Los Angeles to Dallas in the spot market has risen to $3.16, excluding fuel, “almost triple what it was in April.”

Tight trucking capacity has added to the stress. Slack demand during widespread economic shutdowns drove some operators out of business. Others are having a hard time recruiting drivers who want to work in a pandemic. For-hire trucking fleets are operating 3% fewer trucks this summer than a year earlier, according to the American Trucking Associations.

Bethann Rooney, deputy director of the Port Authority of New York and New Jersey’s port department, says the Atlantic gateway is hearing from some shippers that are routing some cargo to the East Coast because of “problems they’re experiencing on the West Coast.”

“We haven’t seen that volume yet, but based on anecdotal evidence from shippers we expect to see some higher volume in October and November,” she said.