The U.S. economy and labor market are recovering from the coronavirus-related downturn more quickly than previously expected, economists said in a monthly survey.

Business and academic economists polled by The Wall Street Journal expect gross domestic product to increase at an annualized rate of 23.9% in the third quarter. That is up sharply from an expectation of an 18.3% growth rate in the previous survey.

“I have been encouraged that many of the economic indicators have come in above consensus, perhaps suggesting that the U.S. economy is bouncing back stronger than expected,” said Chad Moutray, chief economist for the National Association of Manufacturers. “With that said, there continue to be lingering challenges, especially in the labor market and with uncertainties surrounding Covid-19 outbreaks.”

A rebound in growth in the third and fourth quarters isn’t expected to make up for ground lost earlier in the year. GDP shrank at a 31.7% annual rate in the second quarter and declined at a 5% pace in the first. 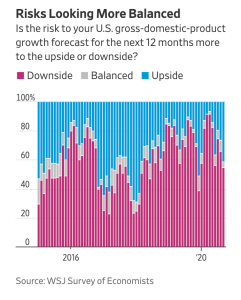 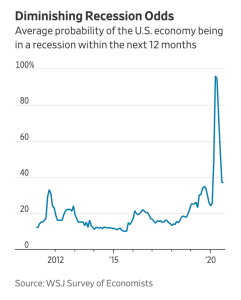 The projected rebound for the third quarter would recoup about half of the output lost in the first half of the year. To return to the previous peak recorded in the final quarter of last year, the economy would need to grow at a roughly 24% rate again in the fourth quarter of this year. Economists see that as unlikely: Their forecast for fourth-quarter growth is for a 4.9% annual rate, suggesting the recovery will be protracted.

The average forecast called for GDP to shrink 4.2% this year, measured from the fourth quarter of 2019, an improvement from the 5.3% contraction predicted in last month’s survey.

Economists continue to believe that the economy is already in a recovery following a recession that the National Bureau of Economic Research determined began in February. Some 82.4% of economists said the recovery started in the second or third quarter of this year, broadly unchanged from last month’s survey.

Economists also see faster improvement in the labor market, after employers added 1.37 million jobs to payrolls last month. The unemployment rate fell below 10% in August for the first time since March to 8.4%, and economists now expect the jobless rate to tick down to 8.1% in December. Last month, they expected a 9% unemployment rate at the end of this year.

The more optimistic outlook came with caveats, however, many of them related to the outlook for containing Covid-19 and developing an effective vaccine.

“A second wave of the coronavirus, escalating tensions with China, contested elections, civil unrest and insufficient fiscal stimulus could be a toxic cocktail that pushes the economy into a second dip” in the fourth quarter, said Philip Marey, senior U.S. strategist at Dutch lender Rabobank.

One concern is that a recent reduction in federal jobless benefits could dent consumer spending in the months ahead. President Trump last month signed an executive action to provide an extra $300 a week in federally funded jobless benefits, less than the extra $600 a week payment that was in place from April through July.

An overwhelming majority of economists surveyed in August said the economic rewards of additional jobless benefits for laid-off workers outweighed concern that the extra payments could deter people from going back to work.

Still, lawmakers are at odds over the size and content of another package of relief measures, such as additional jobless aid. Talks between Republicans and Democrats over fresh coronavirus aid remain at a standstill, as both parties blame the other for the lack of progress over the summer.

The Wall Street Journal surveyed 62 economists from September 4-8, though not every economist answered every question.